This account is based on the article written by Seamus O'Brien for the Skibbereen and District Historical Society Journal.

The story of St.Fachtna's Silverband began in 1912 when it was established by Gerald Joseph Macaura, who was, in fact, born in Skibbereen. Gerald had a full set of 40 "Bessons" instruments manufactured and also engaged Mr.Chipchase to teach and conduct the band.
In a bid to provide ongoing funds for the upkeep of St.Fachtna's Silverband, Mr.Macaura built one of the first cinemas in the south of Ireland - the "Kinemac" located at the rural end of Ilen St. Even though this did not prove a success, Mr.Macaura continued to support the band from his own recources for many years.

Under bandmaster Joseph Chipchase, the band practiced every night in a store room at the back of Jackie Levis's chemist shop in Main Street.. He was extraordibarily dedicated to the band, throwing himself wholeheartedly into the full-time job of conducting and coordinating.
Each Sunday there was a march in the Skibbereen area followed by a recital at the square.

One of the highlights of the band's year was to play in the Square to ring in the New Year.
They marched, quite frequently during the summer months, from Skibbereen to Lough Ine, to play on the front lawn of Dr.Macaura's house. Along the route, they gathered a long, enthusiastic crocodile of spectators, who also gathered around to hear the recital. Later in the day, the band marched back to Skibbereen, playing all the way.

In 1914, the beginning of WW1 seems to mark the band's first slide into depression and the instruments were placed in the Munster & Leinster Bank for safe-keeping, and remained there for many years.

It was revived by some of the older members many of whom had become involved in the Catholic Young Men's Society, which later took over the band. This did not meet with universal approval because of its strict policy of non-involvement in Politics. 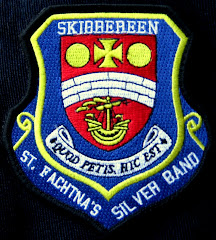